Although the coming of the Spanish, Russians, and fur traders in the early 1800’s brought sudden devastation to Native Californians and their way of life, throughout the first half of the century the Pomos in Potter Valley were mostly removed from the battles, new diseases, and forced servitude, with the exception of a smallpox epidemic in the village of Canel in the 1830’s.

With the Gold Rush in 1848-50, however, Europeans came in droves, to stay. Though treaties were proposed guaranteeing lands for most California Natives, including Pomos, they were not ratified, and California law set up all land not claimed to be public (see Legislation). Land was open to be settled by non-Native people.

Beginning in 1853, settlers arrived in Potter Valley. As land was taken up for ranching, the Pomos were forced to move their villages and camps, and lands they had always gathered their food and supplies on were suddenly taken over by livestock. They were forced out to the edges, where land was not fertile, not allowed to gather in the fields and were hard-pressed to find enough food to survive. 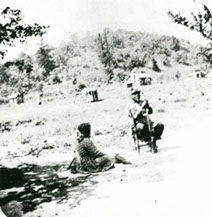 Some Potter Valley ranchers were friendly with the Pomo people, some set aside land for them or gave them work, some married Native women. But inevitably troubles arose between Natives and some of the settlers, as was happening all over northern California. In 1871 most of the remaining Potter Valley Pomos were rounded up by militia and brutally forced to walk to Round Valley Reservation. The Pomo people call this tragic event Bloody Run because the Eel River ran red with their blood. Few escaped Bloody Run, some were taken in and stayed with ranchers.

Conditions were bad in Round Valley Reservation too, with broken promises of land and support. In 1878, a large group of Potter Valley

Pomos left the Reservation and purchased 51 acres of land on the north side of Ukiah. It was called ke-buk ke-bul, but soon came to be known as Pinoleville.

However, the Ukiah townspeople complained about the ceremonial cremation and loud wailing, which, in tPicture31he traditional way, went on for days when there was a death.  In 1893, the Pinoleville captains joined with other Northern Pomo captains, and traded their land at $10 for 100 acres between Ackerman Creek (ya-mo-bida—wind hole creek), and Orr springs Road. Their new home was named ya-mo for the persistent winds coming out of the canyon. 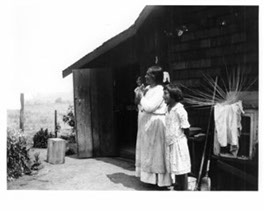 Here the Pinoleville Pomo people settled. Many of the scattered Pomo people still needed homes. Families from other tribelets arrived and the captains allowed them to live on Pinoleville. In 1905, a BIA survey assessed the privately owned land as overcrowded, and through the Homeless, Landless Indian Act, a Rancheria was purchased next to the private land in 1911. Ukiah Rancheria, as it was first called, later became known as Pinoleville Rancheria.

Some Pinoleville people took up farming their land, others found work in surrounding areas. Men and women became part of the primary labor force for agriculture in the Ukiah Valley, with a reputation for being skilled, hard workers. Women continued to weave their excellent baskets. 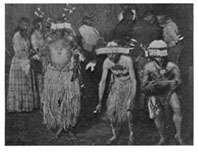 A day school was built on the private land; a second school and a Catholic church were built later, on the Rancheria. The BIA began efforts to organize the tribe in the 1930’s.

In the 1950’s, the US government decided to follow a policy of integration of the Native people living on the rancherias into the general population. Through the Rancheria Act of 1958, the BIA guaranteed help towards independence by bringing housing and water systems up to the standards of the nearest metropolitan area. In 1966, Pinoleville Rancheria was terminated, and the land, already divided into parcels, was deeded to individuals. The privately purchased land remained held in trust for the Pinoleville Tribe by the Superior Court.