The roots of the Pinoleville Tribe go back to Potter Valley, a lush, abundant area called Be-lo-kai, meaning verdant valley. In the era just before Europeans arrived, there were three main villages, called Pomo, Sedam (or Tse tum) and Canel (or Shanel, Sanel), and several smaller villages and camps. These people all spoke Northern Pomo.

The name “Pomo” came from the village Pomo poma, where ancestors of some of the present tribal members lived. (Literally po- something valuable, mo- hole, the word for magnesite bead; poma- people.) It was chosen by an early ethnographer to name a large linguistic group of seven distinct languages. The thousands of people who spoke any of those languages later became known as Pomos. 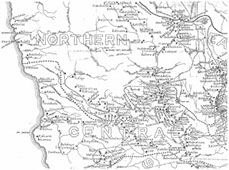 The villages varied in size, from five to nearly a hundred houses, and were usually made up of a few families, who often intermarried with people from other villages or tribes. Alliances were maintained with other villages through marriage and doing ceremonies together. The villages were governed by minor councilmen called tca ka-li in Northern Pomo. They were also referred to as Captains. Leaders were chosen for their abilities or their power, and the position often passed on down the family line.

Healing was done by outfit doctors (men) and sucking doctors (women or men), using ceremony, songs, and herbs. Some kinds of healing arts were passed down the family line, other knowledge came through dreams. 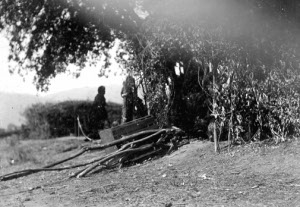 Winter shelters (tca) were hemispherical, with floors sunken a foot or so into the ground and walls woven of willow, thatched with thick grass, tules, or willow. These might house anywhere from one to five families. They also built small sweat houses (tca-ne), which also served as meeting places or warm winter quarters for men. The main villages had large meeting houses, or roundhouses, some of which could hold several hundred people for ceremonies and dances. In the summer camps, a brush shelter sufficed.

The people moved with the seasons, gathering whatever they needed where it was abundant. In spring, a journey along an extensive system of trails was made to the coast for seaweed, abalone and shellfish. These were dried and brought back for winter supplies. Hunting of small game, taken with ingenious traps, spears, or arrows, was done year ‘round.

In the meadows they gathered clover and other greens early in the year; later they harvested many varieties of seeds to make yuhu, or pinole, one of their staple foods, and dug the well-liked Indian potatoes. Late spring and summer found the people breaking into smaller groups, coming and going from their main village, camping along streams and rivers, gathering food, medicines, and materials for making their household tools, fishing, or hunting. 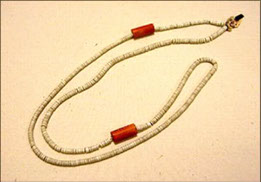 As summer progressed, trips would be made to gather berries and other plants on the hillsides. Summer was also a time for visiting neighboring villages, perhaps attending a celebration, doing some trading as far away as Clear Lake for obsidian or Stonyford for salt, or making a trip to the Coast for more seafood.

The most important staple food of the Pomo people was acorns, gathered in the fall and carefully stored for winter. Pepperwood nuts and buckeyes supplemented the winter diet. Fish, deer and elk meat were also dried for winter stores.

Winters were a time for making the implements needed for daily life. The Pomo people excelled in making baskets, which later became collectors’ items and world famous. Beads were fashioned from clam shells, extra valuable ones from magnesite; long strands of them served as money for the Pomos, and much trade was done using this medium of exchange. String was made, arrow and spear points were shaped from obsidian or chert. Regalia for ceremonies and celebrations was created with the many feathers collected throughout the year.

Ceremonies and celebrations were an important part of life for the Pomo people. They held ceremonies to insure and to give thanks for a good harvest. Other ceremonies honored their religious beliefs, or marked a new phase in a person’s life. And whenever visitors got together, there was dancing and singing, gambling, foot races, and general good times.